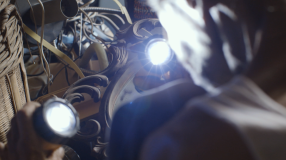 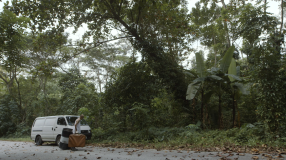 In the forest of copper columns, a man performs a ritual of cleansing.

Russell Adam Morton (b. 1982, Singapore) is an artist and filmmaker. He is a graduate from The Puttnam School of Film, Lasalle College of the Arts (2010) and obtained an MA in Fine Arts from Camberwell College of the Arts, UAL (2012).

His films have been part of the Athens Video Art Festival 2012 and participated in several group shows in London. The film, The Silent Dialogue of All Artworks was screened at the National Museum of Singapore’s 10th Singapore Short Cuts, The Substation’s 4th Experimental Film Forum and the Thai Short Film & Video Festival 2014. The film later went on to win Best Experimental Film at the 5th Singapore Short Film Awards.

Bani Haykal (b. 1985, Singapore) is a sound artist experimenting with text + music. His work stretches across several disciplines including installation, poetry and theatre. He is a member of b-quartet, OFFCUFF and sound-painting ensemble Erik Satay & the Kampong Arkestra. Haykal has collaborated, exhibited, performed and toured internationally. He is currently an associate artist with The Necessary Stage.